This date marks the birth of Fannie Barrier Williams in 1855. From Brockport, N.Y., she

was a Black social reformer, lecturer, clubwoman, and co-founder of the National League of Colored Women.

Williams graduated from the local State Normal School (now the State University of New York College at Brockport) in 1870. Thereafter she taught in freedmen’s schools at various places in the South and in Washington, D.C. She also studied for periods at the New England Conservatory of Music in Boston and at the School of Fine Arts in Washington, D.C.

While helping her lawyer husband establish his practice in Chicago in the late 1880s (at one time he was a partner of Ferdinand Lee Barnett, husband of Ida B. Wells-Barnett), she became active in civic affairs. Williams helped organize Provident Hospital and its Training School for Nurses, both interracial institutions, in 1891. In May 1893 she gave an address on “The Intellectual Progress of the Colored Women of the United States since the Emancipation Proclamation” to the World’s Congress of Representative Women (held in conjunction with the World’s Columbian Exposition).

In September she addressed the World’s Parliament of Religions. These two public appearances brought her national recognition, and for a decade or more afterward she was in great demand as a lecturer. Also in 1893 she helped found the National League of Colored Women, and she remained a leader in its successor organization, the National Association of Colored Women. In 1894 Williams was proposed for membership in the prestigious Chicago Woman’s Club. Debate within the club raged for more than a year; one of Williams’ stoutest supporters was Dr. Sarah Stevenson.

In 1895 Williams became the club’s first Black member. She wrote regularly for the Chicago Record-Herald and the New York Age and worked quietly in many ways to open new opportunities to Black women. From 1900 she became an outspoken supporter of Booker T. Washington’s program of accommodation and self-improvement. In 1924 the widowed Williams became the first woman and the first African-American to be named to the Chicago Library Board. In 1926 she returned to her native Brockport where she died on March 4, 1944. 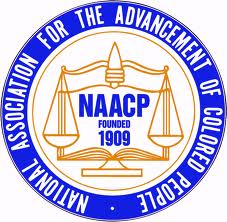 Founded in 1909 in New York City by a group of black and white citizens committed to social justice, the National Association for the Advancement of Colored People (NAACP) is the nation’s largest and strongest civil rights organization. The NAACP’s principal objective is to ensure the political, educational, social and economic equality of minority group citizens of United States and eliminate race prejudice. The NAACP seeks remove all barriers of racial discrimination through democratic processes. This mission is accomplished by seeking the enactment and enforcement of federal, state and local laws securing civil rights, and by informing the public of the adverse effects of racial discrimination. From school desegregation, fair housing, employment and voter registration, to health and equal economic opportunity, the NAACP, working successfully with allies of all races, plays a significant role in establishing legal precedents in order to improve the quality of life of America’s downtrodden. For more than ninety one years, the NAACP has been built on the individual and collective courage of thousands of people. People of all races, nationalities and religious denominations, who were united on one premise –that all men and women are created equal. Although, one could write great prose about the triumphs of the NAACP, there is nothing more powerful than the facts of how the existence of the oldest civil rights organization has changed the face of history for this country. And despite threats of violence, and official government policies that were racist the NAACP continued and will continue to persevere.

On this date in 1900 “Lift Ev’ry Voice and Sing,” also known as the Negro National Anthem 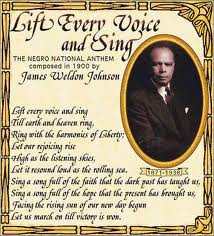 and the Negro National Hymn was sung publicly for the first time.

Written by James Weldon Johnson with music by J. Rosamond Johnson, the occasion was a celebration of the birthday of Abraham Lincoln at the Colored High School in Jacksonville, Fla. In 1926, Johnson acknowledged that the song was not written as an expression of African-American solidarity.

He said “the song not only epitomizes the history of the race, and its present condition, but voices their hope for the future.”